DEAD SECRET makes careful use of light mapping to control the mood and tone of each room.  Careful manipulation of light and darkness was one of our key tasks in building the game, and Art Director Mike spent almost as long on lighting our scenes as he did building them.  We structured our lights and light maps very carefully to produce subtle lighting and also maximize rendering efficiency.  In the end we were pretty happy with the result.  Then we upgraded the project to Unity 5.

You may have read about other developers who spent a lot of time and money on upgrading to Unity 5, mostly because of changes to the lighting system.  Unity 5 completely replaces the light mapping system used in previous versions (Autodesk’s Beast) with a new lighting system (Geomerics Enlighten) that specializes in realtime global illumination.  We had heard horror stories from other developers who attempted the transition of large projects to Unity 5, and so we waited, hoping that the issues would be worked out in time.  By all accounts the Unity team spent 2015 burning the midnight oil to fix bugs and improve workflows in particles, physics, performance, and lighting.  But, over a year since the release of Unity 5, transitioning a large project to Enlighten is still a pretty brutal experience.  Here’s how we did it. 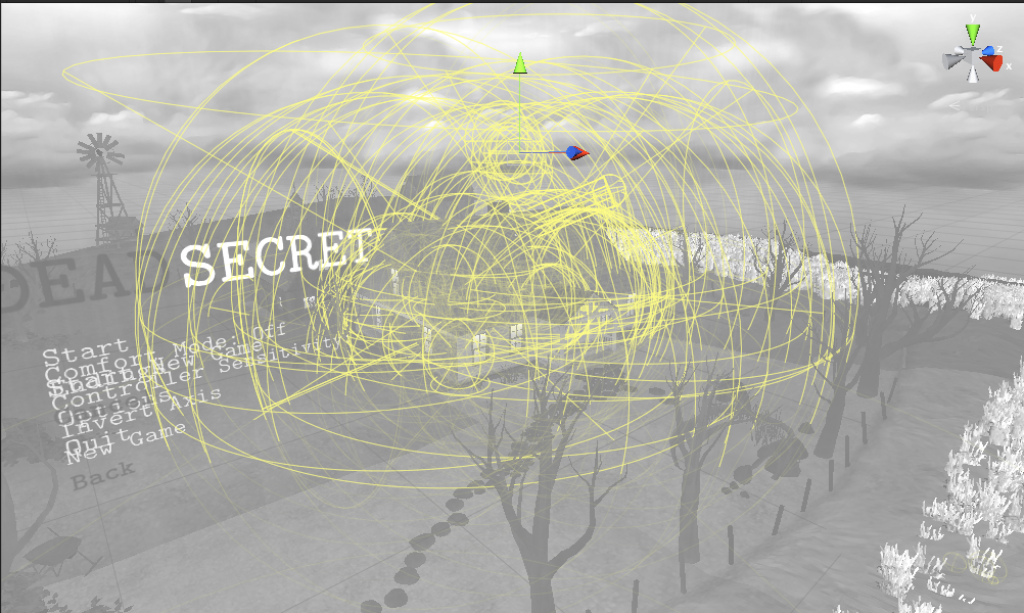 Dead Secret is all one scene and has a lot of baked lights in it.

Dead Secret’s scene is organized around the following constraints:

Given those requirements, our Unity 4 implementation in Dead Secret looked like this:

This gave us pretty good results.  We got our huge scene down to seven 4096×4096 light maps, which accommodated our batching requirements.  We could dynamically swap between day and night and see the lights, ambient, and light maps instantly change.  Because almost everything was static and baked the runtime cost was low enough for us to hit 60 fps in VR on mobile platforms.  It looked good and we were pretty happy with it.

Though the final results were good, rendering light maps in this way had two major problems in Unity 4.

First, rendering light maps was slow.  Like, really slow.  20 to 30 hours on my work machine to render both day and night maps.  This wouldn’t have been so bad except that when light mapping completes the scene file is modified.  Since the entire game is implemented in one scene, nobody on the team could do any work while light mapping was running.

Second, having 14 4096×4096 textures in your game (along with everything else) was too much for Unity 4’s 4 GB of addressable memory.  As a 32-bit application, the large light maps caused the Unity editor to crash all the time.  Now, a 4096 texture uncompressed with mip maps is about 85 mb, and with 14 of these you’re talking about over a gig of memory.  Still, it was annoying.  To continue working we had to drop the resolution of the light maps to 1024 and then write a command line build script that resized the textures, made a build, and then sized them back down, all without every initializing the graphics system to avoid extra memory overhead.

With those caveats aside, lighting in Unity 4 worked well.  We shipped on Gear VR in October 2015 based on Unity 4.  But, for PC and upcoming PS4 releases, we knew we needed to finally ditch Unity 4 and move on to 5.

The good news was that, other than lighting, almost everything about our project worked without modification under Unity 5. We had a couple of scripts that needed modification, and the transition exposed a few race conditions in the game that hadn’t manifested earlier.  But DEAD SECRET was playable under Unity 5 after just a day or two of work. 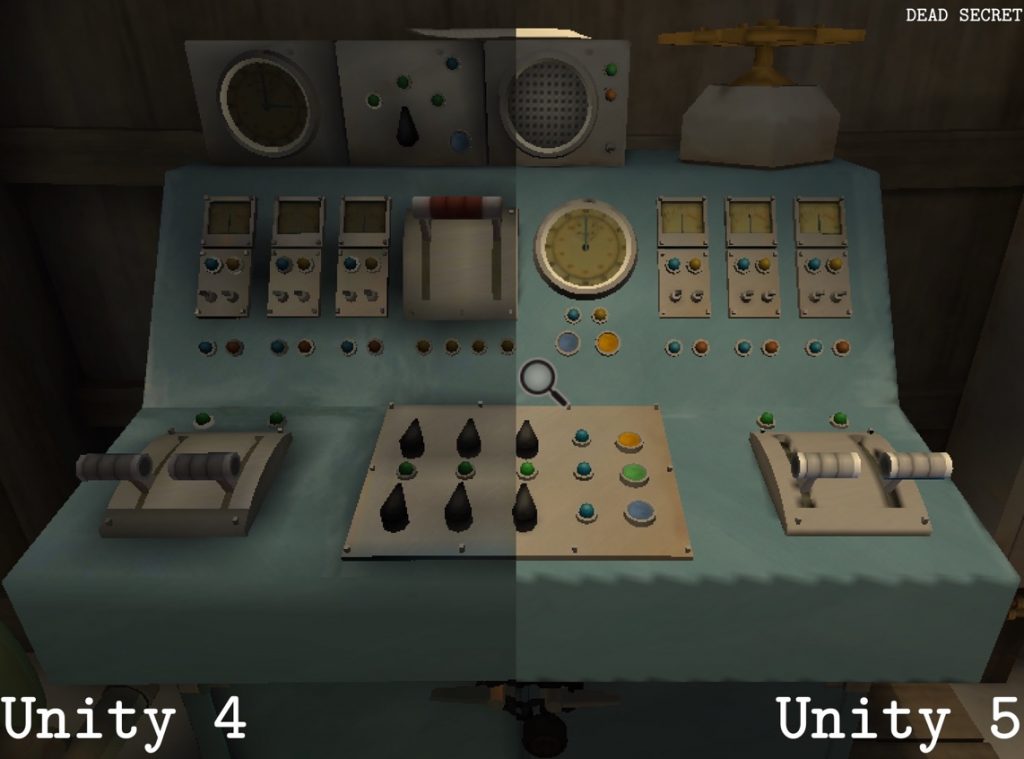 Same scene, same lights, same mesh in Unity 4 vs 5. We get those jaggy shadows on all sorts of edges throughout the game. Note that actual Unity 4-based versions have 4x more map res than shown here.

Lighting, on the other hand, was pretty busted. Over the course of several months we worked to recreate the lighting quality we had in Unity 4 using Enlighten, and the road was not easy.  Along the way I filed more bugs against Unity than I have in the five years of Unity game development.  Not only is Unity 5 lighting different than its predecessor, it’s still a work in progress.  The main challenges we face under Unity 5 are: 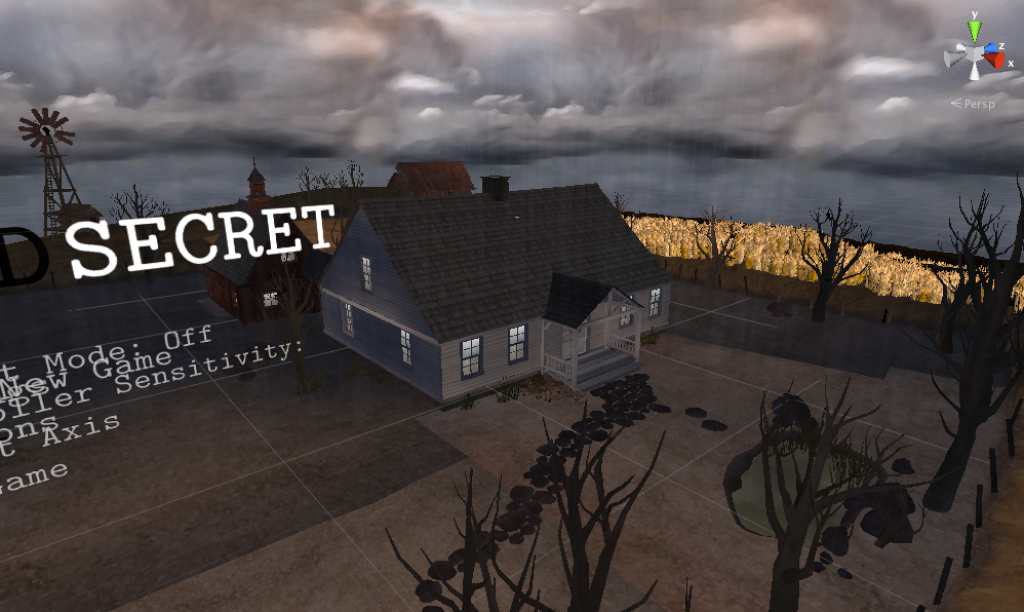 Our scene view is a mess under Unity 5. Due to LightingData hacks we can’t see real lighting until we hit play.

On the upside, Unity 5 is a 64-bit app and doesn’t crash because of large light map textures any more.  But our lighting takes longer, took us months to figure out the proper setup for, and it looks significantly worse than the Unity 4 build of the same scene.  The realtime GI features of Enlighten look nice but as a mobile and VR developer, I have no use for them today and am unlikely to have any use for them at any time in the next few years.  Therefore my conclusion is that the move from Beast to Enlighten has been, for developers like ourselves, a disaster.

I do think that Unity understands that the situation isn’t good.  I’ve been told that mixed lights are expected to work again in Unity 5.4.  I’ll find out if that’s true when 5.4 comes out of beta and becomes the stable branch.  A new light mapper was announced at GDC this year, and the demo they showed was impressive.  But since there was no hint of a release date I expect it won’t be usable for at least a year.  Going forward, we won’t need to do the Unity 4 -> Unity 5 transition ever again (and, per this experience, the cost/benefit of upgrading our other old games is deeply negative, so those games are effectively deprecated).  New games written against Unity 5 (including our next super-secret mobile VR project) should be easier to manage.  Maybe one day Unity scene loading on mobile will get fast enough that I can actually use multiple scenes without significant loads between them, which would ease the burden put on the light mapping system.

Speaking with other developers, a bunch of folks have similar issues with Unity 5’s new approach to lighting.  Some are doing their light baking outside of Unity, and a few have gone so far as to implement their own light mappers.  Folks using the realtime GI stuff also have complaints, although theirs are different.  I suspect the lighting team at Unity is under significant pressure from a bunch of different sources, and I don’t envy that position.  Here’s hoping it the situation improves soon.

This entry was posted in dead secret, unity. Bookmark the permalink.